I visited Jupiter Artland on 14 May, the opening day for the 2016 season. This contemporary art venue, mainly an outdoor sculpture park, is situated close to Edinburgh. It’s a private collection which is open to the public. The arts works were commissioned by the owners, Robert and Nicky Wilson.

An admission fee is charged which funds educational arts-related projects.

You drive past Charles Jenck’s Life Mounds en-route to the car park. I was already familiar his work as I’d seen ‘Landform’ outside the Scottish National Gallery of Modern Art in Edinburgh, and an exhibition about his ‘Garden of Cosmic Speculation and ‘Crawick Multiverse’ at the Garden Museum in London.

As I drove closer to the car park, there was a rather garish large sculpture which resembled a fairground ride. On closer inspection, I grew to like ‘Love Bomb’ by Marc Quinn. 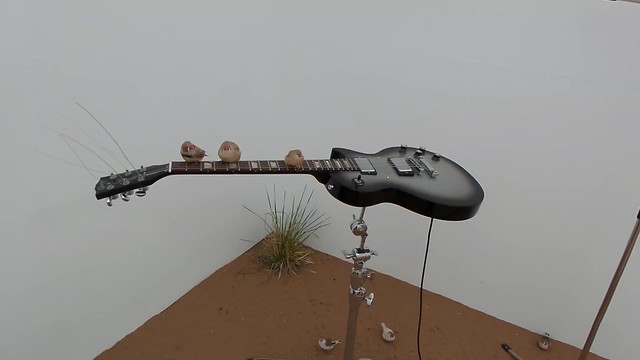 ‘A Forest’ by Jim Lambie adorns the rear wall of the steading.

Helen Chadwick’s ‘Piss Flowers’ are arranged on the grass by the cafe. The flowers display the patterns formed in snow by warm urine.

‘Firmament’ by Antony Gormley was inspired by an old star map.

I found Cornelia Parker’s ‘Landscape with Gun and Tree’ to be quite chilling. The gun was so large, that I could imagine a shot from it causing a lot of damage.

‘Over Here’ by Shane Waltener is a silvery web woven in a similar fashion to Shetland Lace.

There are three pieces by Ian Hamilton Finlay in Jupiter Artland.

‘Only Connect’ an arched bridge constructed of limestone from Northumberland.

‘Xth Muse’ is a bust of Sappho, an ancient Greek female poet.

Close to Sappho is the ‘Temple of Apollo’.

Laura Ford’s ‘Weeping Grils’ are five figures carved from wax. You can’t see their faces, but their body language suggests childhood tantrums. I was almost expecting one of the girls to stamp her feet.

I thought that Jupiter Artland was fantastic. It feels as though all the artists have taken on the brief of creating pieces which work really well in the rural landscape.