Dreamland in Margate is one the oldest surviving amusement parks in the UK. It dates back to the 1860s, when it was called Hall by the Sea. It was renamed Dreamland in the 1920s. In 2003, when the park was threatened by closure, the Dreamland Trust was formed, which managed to raise £18 million in funding to renovate the park.

Dreamland is located on Margate’s seafront, a few minutes walk from the railway station.

I requested complimentary day passes for myself and our son Gary. When we arrived, the High Dive Show had just started, so we walked over to watch it. There were diving boards at various levels, the higher ones were reached by a narrow ladder tower, from which the four divers performed various stunts.

The burning dive was the most dramatic part of the show. 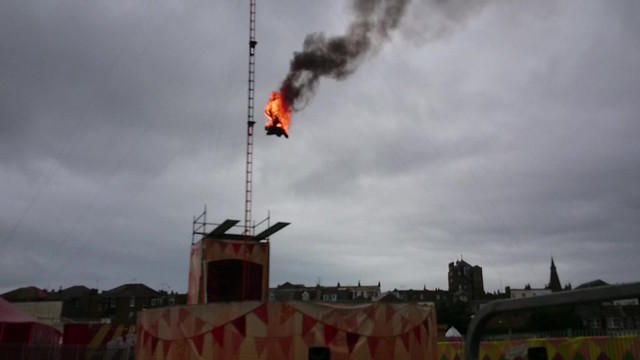 We visited on a chilly Saturday in early September, which meant that Dreamland wasn’t that busy. The benefit of this was that there were no long queues for the rides, and that there was always space to sit at the picnic tables.

Unfortunately, the restoration of the wooden Scenic Railway, the oldest rollercoaster in the UK,  hadn’t been completed. But I did seem some staff testing the equipment.

There was a live song and dance show.

Gary had a shot on the Dodgems.

Dream Cars was ideal for young kids who could pedal the model cars around a track.

The Hurricane Jets were popular in the 1950s.

Gary said that he didn’t feel much effect from being swung upside down in Top Spin.

However, when he came out of the Rotor, which looked like being spun in a top loader washing machine, he wanted to sit down for a few minutes. I felt dizzy watching from the observation platform.

We had a laugh in the Mirror Maze, but it didn’t take too long to find our way out.

Gary looked as though he’d shrunk when he sat on the enormous deck chair.

Some kids had numerous trips down the Born Slippy giant slide.

Gary had a couple of revolutions in the Big Wheel.

Make sure that you check opening days and times at Dreamland before you visit.